Everyone goes on and on about “the terrible twos”.  Weary parents the world over have bemoaned how terrible life becomes once the small ones move past the “cute, unable to escape you” phase to the point that it has become a cliché.  This might be surprising to hear from the guy constantly going on about the challenges of parenting, but I didn’t find “two” quite so bad.  Sure Roundbottom could run and hide around the house now, but he was still so wobbly that I could catch him pretty easy.  That, and his hiding skills still left something to be desired: 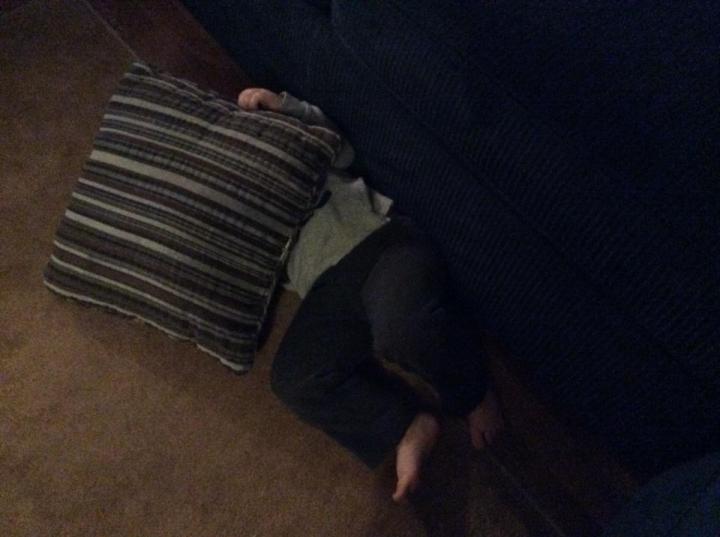 “Nothing to see here, folks.”

Then he turned three.

He could talk now.  And with the power of speech came something truly terrifying:

EVERYTHING is a negotiation now.  I can’t ask him to sit down without getting into a five-minute argument about how he not only doesn’t want to sit down, but shouldn’t have to because he’s obviously in the middle of something very important that shouldn’t be interrupted.  Like chasing the cats.  If not for the fact that I’m still far larger than him, there would be no way for me to enforce the rules of the house.

Of course, he just sees that as parental brutality, and such injustice WILL NOT STAND.

I used to joke that with the way he hopped around and hooted all the time, he was channeling John Belushi.  Now it appears that another spirit has taken hold of my diminutive barrister:

Don’t believe me?  You better start. From what I hear from other beleaguered parents, EVERY three year old now comes with a juris doctorate.  If you haven’t already made it to this stage and found yourself buried under an entirely different mountain of briefs than the diapers you’re used to, you will.  To give you an idea of what we’re facing, let me share with you some of the common defense strategies he employs when caught red-handed in the midst of his shenanigans:

The Jedi Mind Trick:  This is where my son, no lie, actually attempts to use the Jedi Mind Trick on me.  For example, if he requests a cookie, and then is denied said cookie because its 6 in the morning and that is not an appropriate breakfast food, he will fix his gaze on me, concentrate, and say the following:

Fortunately for me, this particular Dark Lord of the Sith has not refined his powers to the point where he has mastered that little trick just yet.  Or Force Lightning, thank Lucas.

The “Exorcist” Defense:  This isn’t him telling me he doesn’t want to do something I ask him to.  Oh, no.  That would be too pedestrian for the likes of him. No, this is when I call him on something I don’t want him doing (again, like scaring the hell out of the cats I didn’t want in the first place but that a story for another time), and he responds with the following:

This is the one that makes MY head spin.  Essentially, the child is telling me that he doesn’t want to do something that he’s been thoroughly enjoying prior to being caught in the act.  This would imply that some otherworldly entity has taken possession of his form and forced him to carry out its evil desires.  Long story short, the only response to this one would appear to be to call a young priest and an old priest.  I’m letting Momma Angel handle that one.

The Stall:  This one is fairly typical from what I know of other children.  It’s the point of night wherein he asks to put off his much-needed (by me) bedtime to engage in some sort of crucial exercise that MUST be completed in order for him to sleep soundly.  The plea deal starts small.  He asks for one more episode of Mickey Mouse Clubhouse.  22 minutes.  Fair enough, that doesn’t seem too much to ask, especially if it’s the weekend.  That’s the trap, though.  Now that he’s gotten what he wants once, it’s time to sweeten the pot:

“One more Mickey Mouse Clubhouse?  The one with Santa?  Watch Three Mouseketeers Movie?”

It’s at this time all previous agreements are rendered null and void, which leads to our final strategy:

The Civil Disobedience of Doom:  Yeah, it’s a temper tantrum.  The likes of which I pray no one else has ever or will ever see:

The child drops to the floor, tear streaked face turned bright red, and essentially becomes completely limp in an effort to impede any attempt of “incarceration”.  Any attempt to reason with him is rendered moot, as the child is caterwauling so loudly that at different points of time, he actually gets so choked up that he goes silent for a brief moment.  At this point, it is only the reassurance that he will receive milk, night-night songs, and his “rainbow” night light that will calm him enough to get him to his cell.  I mean bed.

These are only the beginning.  The boy is nothing if not studious, continually seeking to learn and hone his craft.  He’s recently been dabbling in the “You Make Me So Mad” and “I Don’t Like You” strategies.

“No one has ever suffered as I have suffered!”

These however, have not gone over well for him, leading to lengthier sentences and less chance of time knocked off for good behavior.  This is due to one very important, teensy-tiny detail that he has overlooked in the orchestration of his practice:

He doesn’t live in a democracy.  He lives in a dictatorship.

I may not have as much control over my house as more mature, responsible parents my age, but there are some aggravations of justice THAT WILL NOT STAND.  He doesn’t seem to realize that his punishments have not been as egregious as he supposes. This is because I realize that for the most part, he is a very sweet little boy with a good heart.  I punish him in the hopes of keeping him that way and teaching him respect.  Not just for me, but for the community we live in and the people who populate it.  He has to learn right from wrong, and unfortunately fate has bestowed upon me the responsibility to mete out these lessons when necessary.  I am judge, jury, and executioner, and my word is FINAL.

Unless Mommy’s there.  She’s the Supreme Court.  He does NOT want his case to go there……

What strategies do your little litigators employ?  Sound off in the comments section!

You can follow Roundbottom’s ongoing proceedings on instagram at fatherhood_in_the_trenches or twitter @jmwilson3055.  Public opinion will be about the only ace he has left to play at this point……