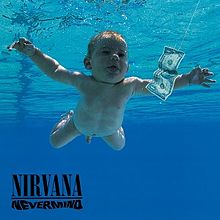 Last week my lovely wife was able to score some free tickets to go see a Nirvana cover band through her work.  She could hardly suppress her glee, being a huge fan of Mr. Cobain’s little garage band that could.  I was instructed to arrange for babysitting service, provide her one of the many cherished flannel shirts I had held onto since high school, and prepare to “get our rock on”.

I’m not a big concert goer.  I can’t stand crowds, and willingly going to listen to music played at ear-drum shattering volumes seems contradictory to my ongoing quest for peace and quiet.  Still, she was incredibly excited, and we hadn’t had many opportunities to get out lately.  I signed on with a smile, my intentions completely altruistic and in no way, shape, or form an attempt to turn this night of rock debauchery into a night of sweet, sweet loving.

So I braced myself for claustrophobia, mosh-pitting, and unruly concert goers.  Sure this wasn’t the real Nirvana, but the music alone would be enough to cause a frenzy, right?

Not so much.  As we stood in line outside of the venue, I noticed it.  Aside from about ten people waiting in line that actually appeared to have been born after Mr. Cobain left us, all of the other concert goers looked to be approaching middle-age.  In fact, a handful of them looked like too much rock debauchery would lead to stroke or heart attack.  They also didn’t dress the way I expected.  There were Polo shirts.

“What the hell?”  I thought, “why are there so many old yuppies coming to listen to Nirvana?  And what’s up with them bringing their kids?  That kid’s got to be elementary school age.  When the hell did “Heart-Shaped Box” become acceptable listening for ten year olds?”.

Then, as we were walking into the venue and made our way over to the bar, I just happened to catch a glance of myself in the mirror.  That’s when it dawned on me:

When the hell did this happen?  When did listening to alt rock become tantamount to listening to Glen Miller?  I got to thinking about it.  “Nevermind” was released in September of 1991, my freshman year in high school.  That was 25 years ago.  It’s having a damn silver anniversary.

That means that the baby swimming after that dollar bill on the cover has been able to vote for about 7 years, drink legally for four, probably already made it through college, is probably close to finishing a grad degree, and may very well have his own baby that he’s trying to get on an album cover for “One Direction” or whatever it is that high school kids listen to these days.  How in the hell has that much time passed?  How quickly is time going to pass before I wake up in a nursing home and start raving at my kids that some nurse made off with my Pearl Jam CD’s?  That’s if they even know what a CD is by then!

As I prepared to go kicking and screaming into my first bout of mid-life crisis, I took a look over at Mama Angel.  There she was, huge grin on her face, 32oz plastic cup filled with beer, reveling in the way her dreadlocks were flying with her frenzied head-banging.   She didn’t seem to get the memo that this was prohibited behavior for a woman in her late thirties who had already had two children.  Far as she was concerned, she was 18 again.

Nature may demand that our bodies get older, but it doesn’t mean we have to let it age our spirits.  At least not all the time.  Don’t get me wrong, you couldn’t pay me to be 16 again.  I’m a big fan of the fact that I have my own place, my own car, can legally buy booze, and don’t have to sit through Honors English and Remedial Algebra again.  Still, it’s nice to know that we’re not only able to regress, but that we absolutely should if we are to have any hope of holding on to that precious thing called sanity.

Yeah, after the concert it was back to changing diapers, 9 to 5, and questioning where the hell my misplaced youth went.  For those few hours, though, we got to let it go.   Our response to the day-to-day trials and tribulations of adulting and parenthood was “never mind”.  It was glorious.

So yeah.  The reflection in the mirror might look a little worn, and you might find yourself questioning when the Black Album turned into a golden oldie, but you’ve still got it in you to rock.  Sure, the morning after is going to suck.  You’ll experience pain that will make you curse the day you were born those many, many, MANY moons ago.  It will take you a week to recover instead of the single day it used to.  However, the benefits to your mind and spirit far outweigh the abuse to your body.  Mama Angel certainly proved to be a perfect example of such that night.